4-10: All There is to Know About Michelangelo

“On the contrary,” said Watson, “my life is going off the rails. I received an e-mail a few days ago.”

“Wow!” Scarlett clapped her hands together and rolled her eyes. “How extraordinary!” 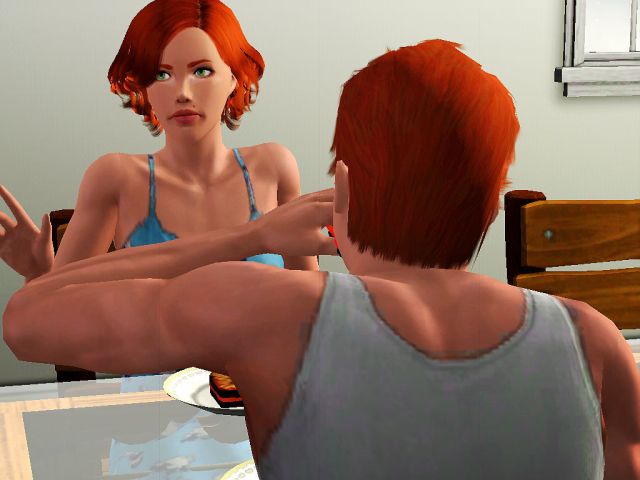 “The last guy I had sex with took a chomp out of my wrist, and now I’m stuck with his spawn; this grilled cheese tastes like Velveeta mixed with embalming oil, and you think your life is crazy?”

“Well, I’m eating the same grilled cheese as you, so it’s at least a third as crazy.” Logic, unlike the rest of the world, often worked in Watson’s favor.

“Grilled cheese is not on the same level as cannibalism, Watson.”

“He didn’t eat your arm, did he? No. He merely bit into it and drained your fluids. He was a vampire, not a cannibal. I think your hormones are confusing you.”

“Are not!” protested Scarlett. “I’m just frustrated, because you’re speaking in goddamn fallacies!”

Scarlett nearly choked on a chunk of Velveeta, and it took several coughs and four glasses of water to she recover her voice. “What the hell, Mom?!”

“Whizzer, Scarlett, you’re doing a slod job of hiding it!”

“Mom, you’ve gotten a lot meaner since Watson kicked Rose out,” snapped Scarlett. “Stop talking forever, or at least for the next ten minutes.”

“You’re making friends?” Scarlett blinked. “I don’t think anyone in this family’s ever had a friend. I mean, we’ve all had boyfriends, girlfriends, friends with benefits friends, but never just a straight up friend. Weird.”

“We’re still acquaintances, I think,” said Watson slowly (love often robbed him of his language), “but I hope we become more than friends someday, you know? He’s really, er, nice.”

“Well, there goes a family first,” said Scarlett. “Is he cute?” 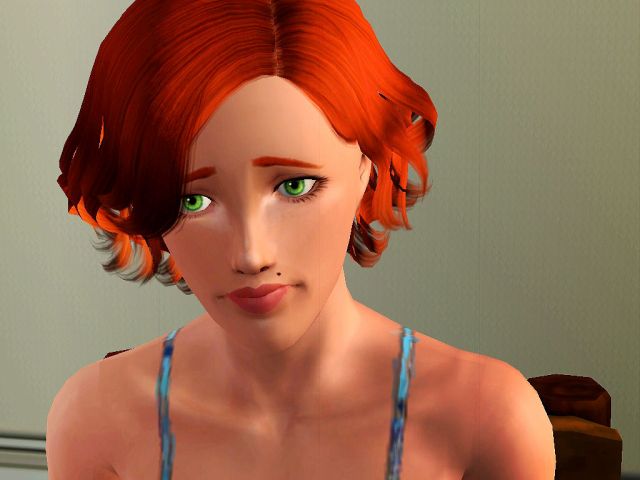 Scarlett lowered her eyes and bit her lip. “And he’s nice?”

“Maybe your life is weirder than mine,” she sighed. “I’ve got to get out of here.”

“Hey, Scarlett,” began Watson, which was not the correct response. Something like “I am so sorry, please forgive me for my budding relationship” would have soothed the hormonally unstable women much more effectively. However, Watson momentarily lacked the words. Scarlett stood up promptly.

Watson opened his mouth to offer halfhearted condolences-there’s no time for misery when you’ve hit love at first sight-but was interrupted by Elizabeth’s cry. “DAD!!!”

His sister would have to wait. Watson, still donning his impeccably spiffy wifebeater, followed his daughter’s voice to the foyer, where she sat beside a pile of moldy laundry. He wrinkled his nose and plopped down beside her. “Elizabeth, that’s disgusting.” 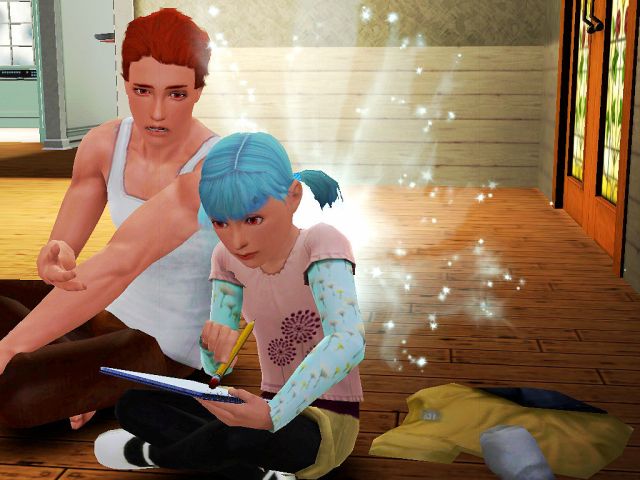 “Not as disgusting as times tables,” said Elizabeth, morosely turning her eyes to her blank homework. “I can hardly grasp addition, let alone these weird cross things.”

Watson blinked. He’d never heard words this large from Elizabeth’s mother. “You’ve got a great handle on language, though.”

“Aunt Scarlett told me more than I needed to know,” said Elizabeth darkly. “But English isn’t going to help me in math, Dad. That’s where you come in.”

“Two times two, Elizabeth. You take one two, and add it to the next.”

“Can you illustrate that?”

“What? You’re not making any sense. This math is simpler than counting calories.”

“I can’t do anything right,” sighed Elizabeth, burying her head in her hands. “Ever. I just mess all of my schoolwork up, and the only thing I have to show for my troubles is a big fat F on my report card.”

“And you dress like Portlandia,” commented Malix. Everyone wisely ignored him.

Elizabeth quickly sketched a stick figure wearing a top hat, then held her notebook up to her father. “Does this look like the Mona Lisa?”

Elizabeth doodled, furiouser and furiouser, until not a single times table peeked out from behind layers of stick figures. “I want to be an artist when I grow up,” she confided in her father as she set down her pencil. “Artists don’t need math.”

“Everybody needs food, Dad, but we can all survive without algebra.”

Watson sighed. Suddenly he had a deep a hankering for Elizabeth’s gurgling days. Her current eloquence reminded him dangerously of his teenage days-snark is reserved for adolescents and writers, after all, and neither are consistently pleasant to spend more than half an hour with.

Outside, Scarlett lay in the snow, swishing her limbs back and forth like windshield wipers. Though the world slapped her in the uterus, chomped on her wrist, and sat heavy on her mind, enjoyment still lingered in the guise of an evening snow. If she could have her way, she’d never leave it unless opportunity danced her way. If opportunity ever chanced her way.

Nice guys, cute guys-who needs them? Scarlett molded the snow to emulate her rising heart. An angel, frivolous and free, carrying a child but prepared to leap onto the next train to anywhere. Boredom captivated her easily, and dreams snatched her even faster. Nothing could hold her down. She’d move to Vegas, sweet and gritty, or maybe San Francisco, wild and untamed, or perhaps to Bridgeport, to mingle with the rich and hula with the poor.

A sharp kick of reality jabbed her in the ribs. “Maybe,” she sighed, “maybe it’s too late to dream.”

She sat up slowly and rubbed her temples. Her head ached more than a romantic’s heart. Pregnancy treated her much too harshly.

The front door swung open as Scarlett shakily stood. She glanced up at her brother and sighed. Conversation seemed trivial on a cold winter’s night.

“Being a dad is tough sometimes,” sighed Watson, and Scarlett began to cry. 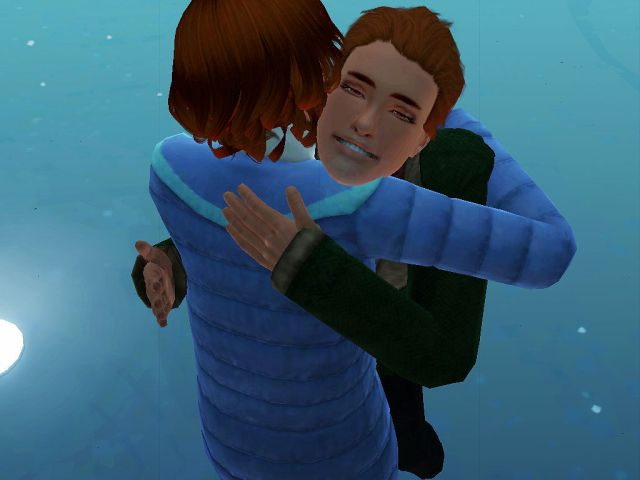 Watson drew her into his arms and hugged her tightly. “Hey, don’t cry,” he said, “you’ll be a great mom.” 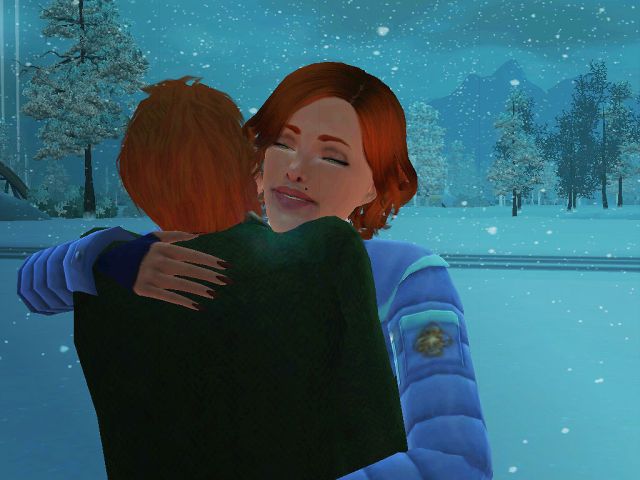 After a long, full pause, Scarlett smiled. “Yeah,” she said. “I guess that’s all we’ve got.”

Satisfied with her answer, Watson stepped back and knelt in the snow. He rolled a snowball between his hands, and then rubbed it against the ground. Scarlett followed suit, and, after realizing that they lacked the ability to make a sufficiently large snowball alone, they decided to combine their mediocre talent to create something wholly average yet mildly mystical.

“So what kind of snowman are we making?” asked Scarlett, patting a lump of snow to create the snowman’s buttocks. She wondered how long it would take Watson to notice their snowman was anatomically correct.

“Traditional,” said Watson confidently. “The others are shams.”

“We used to be a sham,” murmured Scarlett.

“Shamu,” said Scarlett. “I was talking about Shamu.” 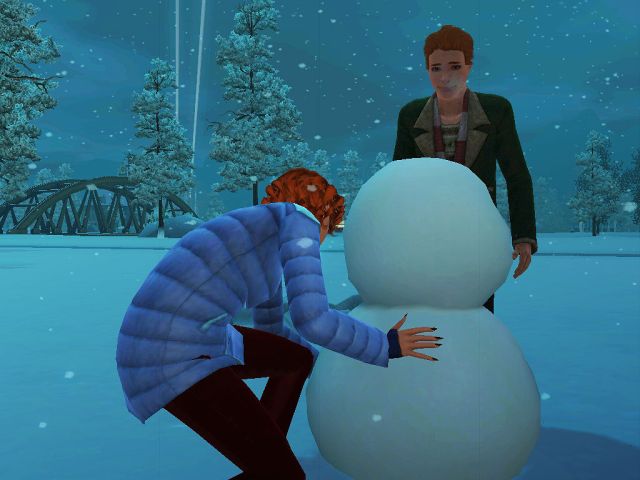 “No,” said Watson flatly. “We’re talking about a whale.” 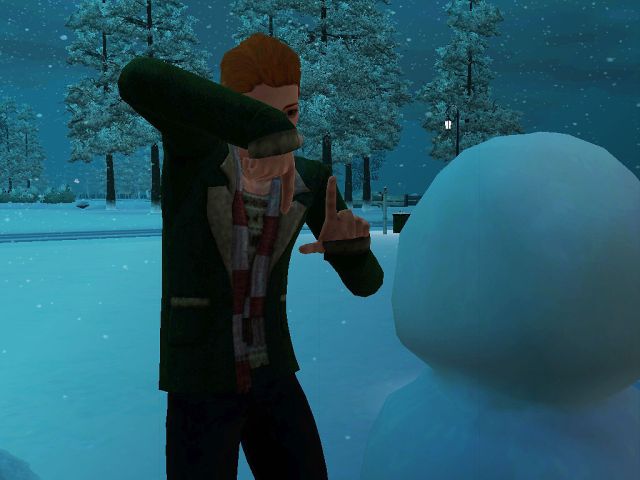 He fastened the head to the torso then paused to examine their work. Through his luxury framing device, he noticed an egregious defect. “Scarlett?”

Scarlett glanced up from her button counting. They had just enough for a snowman overcoat and two black eyes. “Yes?”

She smashed a button into the snowman’s front. “Yes.”

“Very artistic,” said Watson. “I see where Elizabeth gets her talent.” 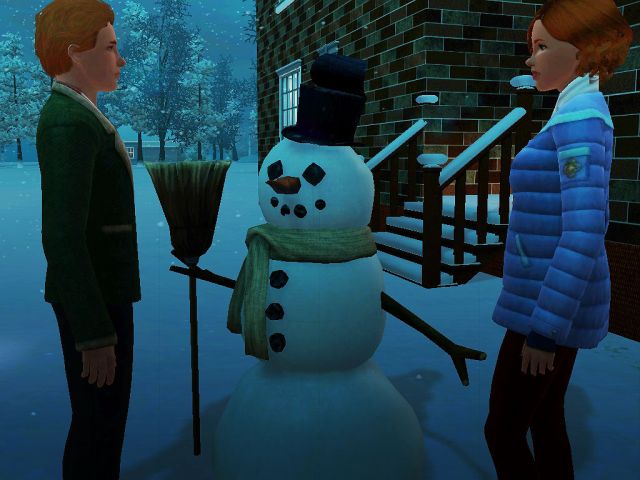 Scarlett wove one of Pandora’s old scarves around the snowman’s neck, and Watson perched a top hat atop his head. They each took a stick and jabbed it into his sides; Watson, in a grand coup de grace, placed the broom in his hand. “Michelangelo couldn’t have done better,” boasted Watson.

“Right,” laughed Scarlett. “Thanks, Watson. For everything.”

Watson opened his mouth for a heartwarming remark, but was quickly interrupted by his phone’s frantic buzzing. “Sorry!” he mouthed, and Scarlett simply smiled and nodded.

His heart bounding up his esophagus, Watson hesitated before pressing the answer button. “Scarlett,” he called, “I’m nervous!” 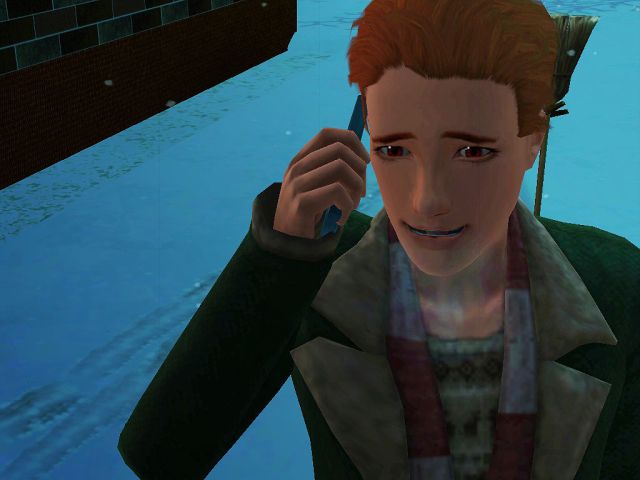 “I’m really sorry, I’ve gotta go-Christ, I’ll get it in a second!-I’ll call you later or something, sorry, bye!”

A/N: Only two more chapters of this generation left! Okay, maybe one. Depends on my writing stamina, haha. I am SO pumped for Elizabeth’s generation. I’ve got the idea planned out and everything. 😀 If anybody has some hot guys they want to donate to her cause, let me know! (Man, I’m just asking for Sims on all of my  legacies, aren’t I?)

Beeteedubs, A Dove of a Different Color‘s second chapter is posted! Blanca goes to the lake and throws a rock to Uranus. Fun stuff. 🙂 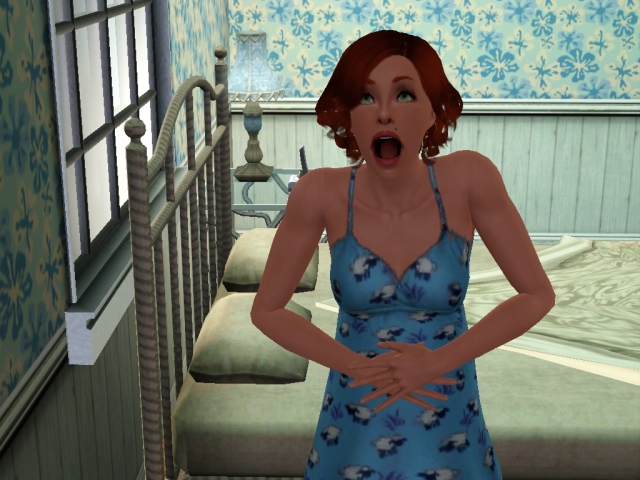 Scarlett’s pregnancy is a bitch. She wakes up screaming every morning, I swear. Tony must be a crazy hard kicker. Probably because he’s like the hottest Sim I’ve ever had born in game ever. /proud Simmer parent

Madison was dreamed up a little east of the middle of nowhere, and was assembled a few blocks away from that. As her shelf life has worn on, she has developed a deep love for writing, style, art, emoticons, cute boys, and videogames-particularly The Sims. She hopes you enjoy her humble blog. Cheers. :D
View all posts by Anonymous Miss →
This entry was posted in Generation 4 and tagged and that's terrible, elizabeth, moonlight falls, scarlett, sims 3 legacy, the belue legacy, young watson. Bookmark the permalink.

12 Responses to 4-10: All There is to Know About Michelangelo