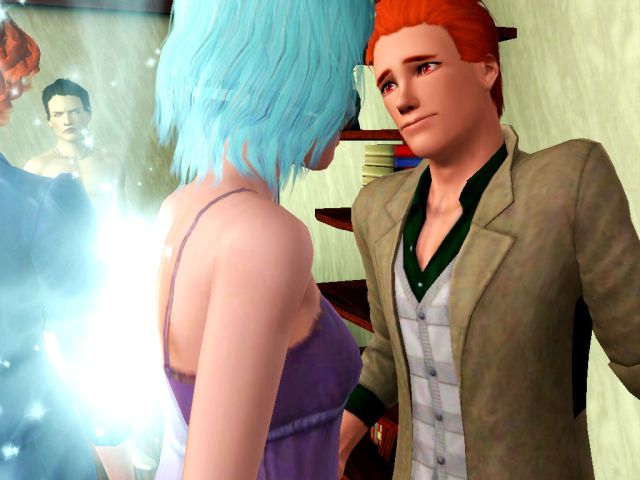 Young Watson bit his lip. The teapot whistled, Scarlett’s boyfriend hissed, and a low growl shook the house more than a gorilla who has skipped breakfast. He thought, a bit too late, that perhaps the kitchen wasn’t the best place to break it off. Another growl rattled the floorboards.

He squeezed his eyes shut. Not again with the growling! It had been nearly incessant since the previous evening, and rather than petering off it only grew louder and more distracting with each passing hour. His confidence shrunk to microscopic levels as the volume hit the stratosphere. He had a sorry task to do, but found it difficult to muster up the courage to follow through with so much racket going on. A very large growl reminded him of tigers, and there are very few men who can stand in the presence of a tiger, let alone simply hear an implied one, without feeling utterly emasculated.

Julia eyed him curiously. When he opened his eyes, she’d tell him. This all depended on the roaring’s volume, however. It was awfully loud. She wasn’t quite sure if the noise was coming from the room beside the bedroom (somebody must have been living there, she reasoned, but she’d never set eyes on the mystery fourth Belue), beneath the house, or from Scarlett’s abominable vampire boyfriend, but wished that somebody would discover a mute button for the damn thing. If it could stay quiet for just one minute, perhaps she’d be brave enough to discover what it was.

In a stroke of fatal luck the growling faded to a dull roar. Young Watson snatched his chance. “Listen, Julia,” he began. 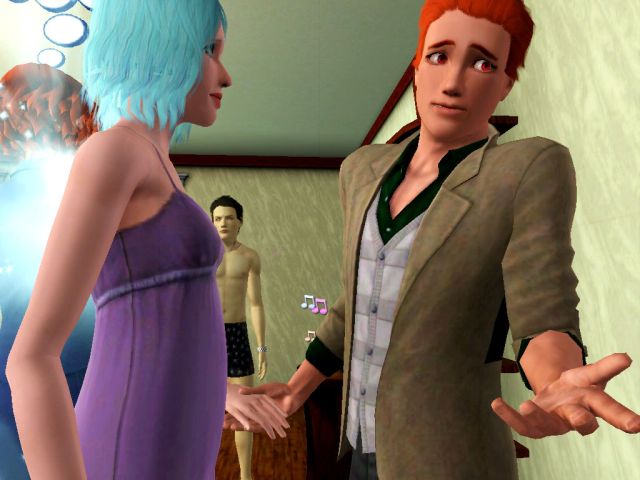 She grabbed his hand before allowing him another word. Young Watson sighed. Women really were too much of a bother. First they took your bed, then your body, then they made a mess of your work life and your social life-all of which was terribly dreadful to clean up afterwards. Young Watson was not afraid of mopping up old wounds, but he was a bit terrified of Julia’s dress. It clung in such a way so as to suggest a foreboding swelling of her belly and a prolonged thinness of her limbs. He gulped. With any luck, the hideous rag was just a phase; it couldn’t mean anything more.

Unknown to Young Watson, Julia also loathed the dress, but she had unearthed enough patriotism from somewhere inside her uterus to make it nearly bearable. “Yeah?” she asked Young Watson, rolling her eyes. Her acceptance of the purple dress did not go without grudge, however. It wasn’t entirely her fault she had to wear it. While history often disagrees with itself, it universally affirms that it takes two procreate.

“We’ve had a great time together,” said Young Watson sheepishly. He should have practiced break ups, like he had most everything else, back while he was still learning his times tables. “But Scarlett’s had to get a job polishing podiums, and we’ve had to resort to selling space rocks to pay for the groceries-!” 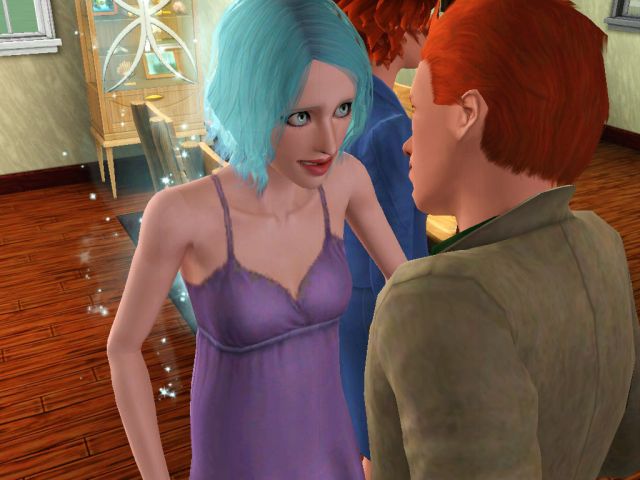 “How convenient!” grinned Julia. “I’ve got the perfect solution.”

“What?” asked Young Watson flatly. His brain, for all practical purposes, slid to a crashing halt.

She patted her belly. “This little fella can make us a lot of money.” 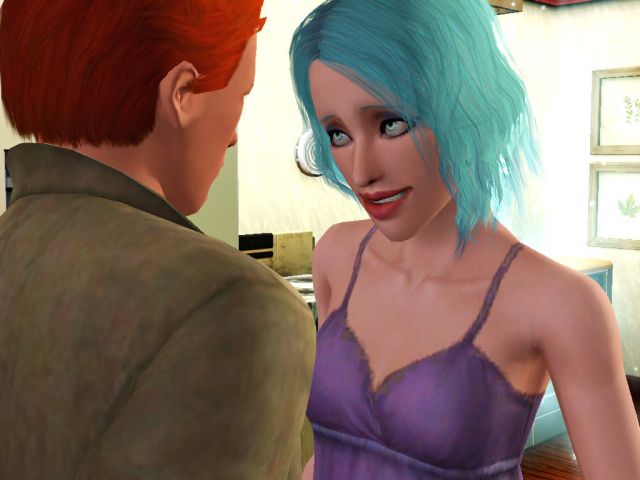 Thunder cracked outside, and a dull rumble clattered the windows. Scarlett, who sat at the kitchen table, wondered vaguely which part of Julia’s statement Young Watson should worry most about, realized their impending poverty, and sadly got out the last bottle of vodka.

The world spun a little closer to its end. 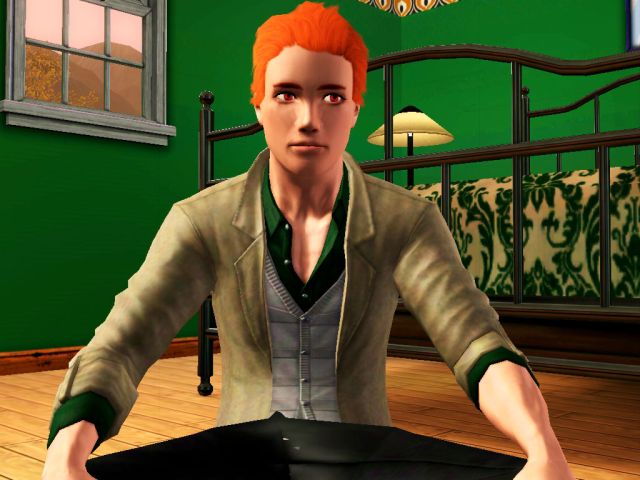 Young Watson was not quite sure what happened after Julia’s fateful words. He knew only that it involved a great deal of vodka and a grand twelve minutes too long sing-a-long to “Sweet Caroline,” and had ended with him sitting cross legged on his bedroom floor, alone and more dour than a Russian Christmas. “She can’t be pregnant,” whispered Young Watson. “I mean we used a-!”

At that moment, Daisy came bursting in, panting more than dog in South Africa. Her tongue lolled from side to side and then suddenly zipped back in her glossy mouth. Her eyes squeezed shut, cheeks puffed out, and lips pursed. “How were the lemons?” slurred Young Watson.

“Young Watson!” she shrieked. Daisy had never taken a stress management class in her life. 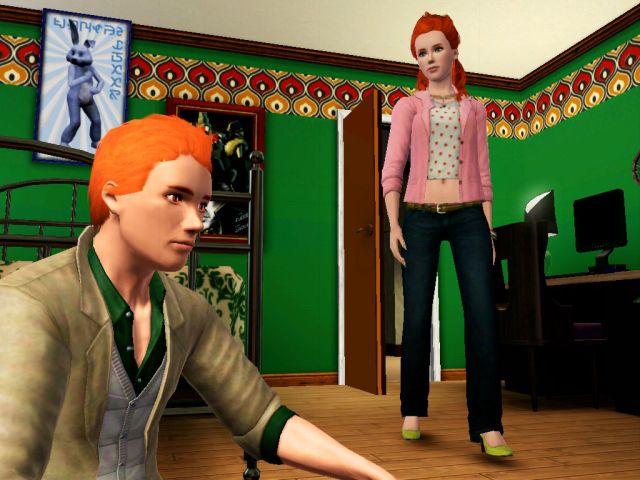 “What in the fuck do you want?” grumbled Young Watson.

“Get up,” snapped Daisy. “You’re starting to sound like Grandpa.”

“Drunk as Grandpa.” Young Watson struggled to his feet. 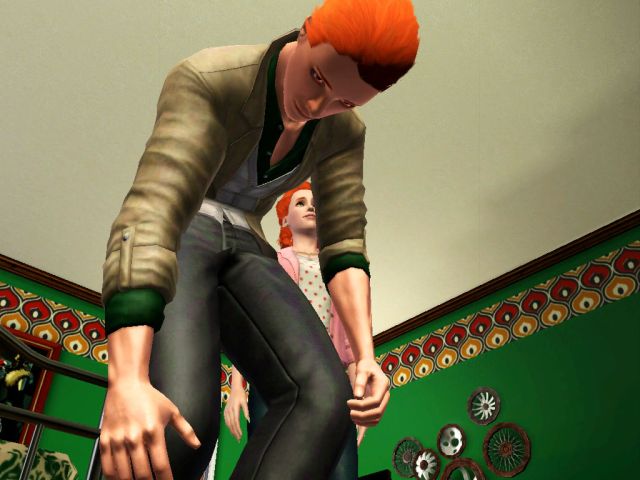 “Hopefully you won’t end up as angry as him-or as dead.” She took a long, tragic breath. “Sad story. Anyway, we’ve got more important matters to discuss.”

“Like how we’re going to afford a fucking baby? And you can’t just, like, trivialize Grandpa’s passing. He leapt into a fucking cooking machine…thing, for chrissake.” 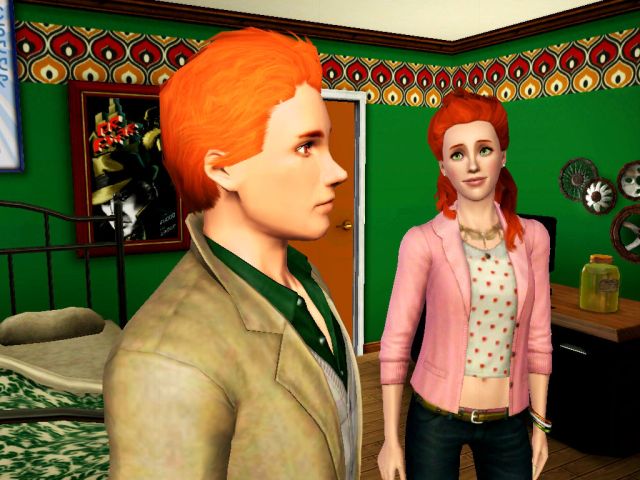 “You’re unbecoming!” retorted Young Watson. He slurred each word to the extent that he sounded like a particularly sloppy mudslide.

After a moment of pondering his words, Daisy snapped back, grinning cheekily (she adored feeling witty-it didn’t happen very often), “And this is the worst night to get wasted. Mom and Dad just called. They forwarded a check and will be here tonight.” 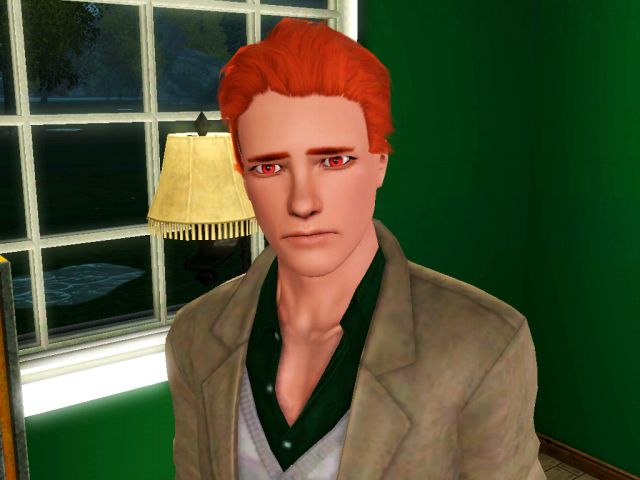 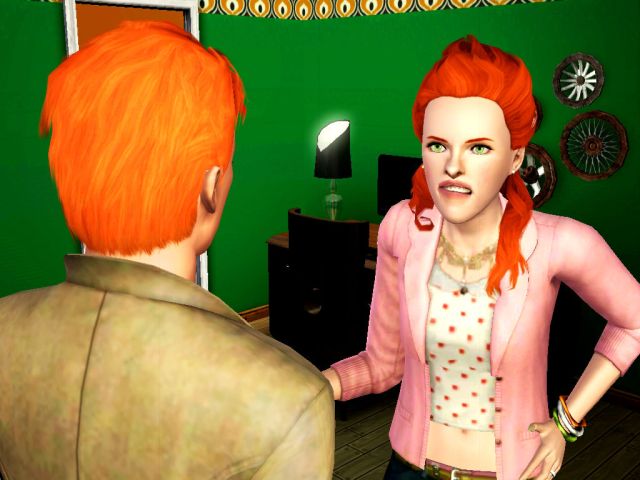 “That’s the reaction I was hoping for, minus the foul language.”

“Oh god,” muttered Young Watson. His hands shook as if they were sitting atop an earthquake. “What am I going to tell them about Julia?”

“The truth? You knocked her up. Now you have to deal with the consequences.”

“I don’t fucking want to deal with the consequences!” shouted Young Watson. “I’ve been keeping this family together since before you could tie your shoelaces, and when things turned sour, I didn’t try to marry myself out of the problem. I’ve worked my ass off to pay for our house, our meals, our bills, and what have you done?” 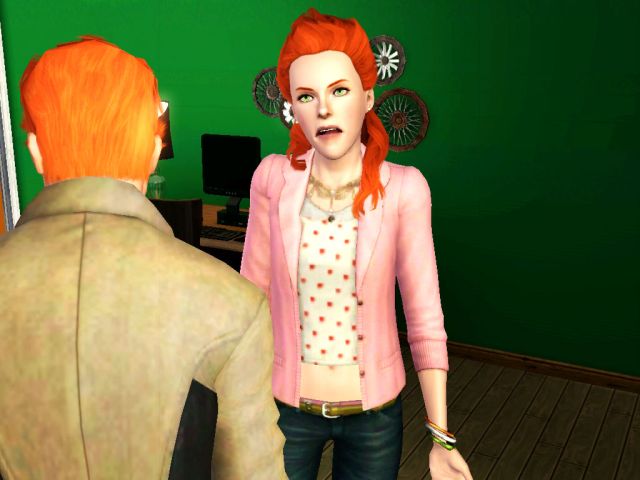 “I wash the dishes!” snapped Daisy. Her cheeks flushed scarlet.

“Is that it?” Young Watson chuckled shortly. His head pounded. “You wash the dishes, and I’ll just keep writing bestsellers so you can afford your designer jeans. You haven’t done a single profound thing in your entire miserable existence. You almost married a millionaire, you almost got a job, you almost went to a dinner party. Almost, almost, almost. Yes, I knocked up my girlfriend, but you know what? I’m not going to like it, but at least I’m going to deal with the goddamn problem and clean up after your mistakes while I’m at it. You waste my life so you can put off discovering yours, and I’m not going to take your shit tonight.”

Daisy stood completely still, jaw halfway to the floor and eyes dripping more than a broken faucet. Young Watson stared at her. She was the smallest human being he’d ever seen.

Daisy opened her mouth to speak, but was interrupted by a deafening roar from Rose’s room. Young Watson threw his hands in the air. “And now I’ve got to deal with whatever the fuck that is, too!” he cried and stormed from his bedroom to his eldest sister’s. 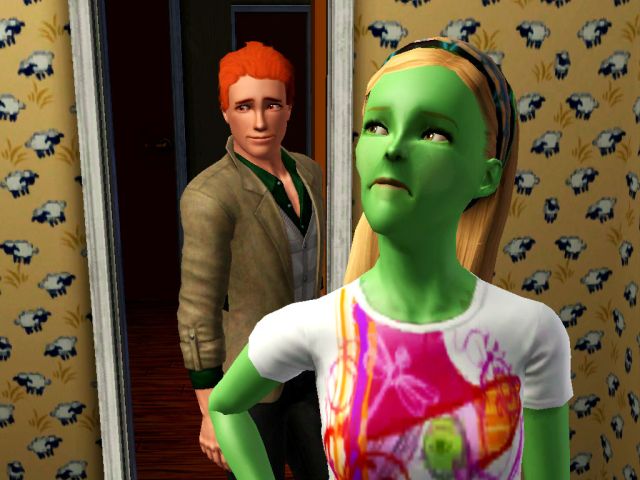 It wasn’t real. It was a joke. A sick, insane prank by his sick, insane sister made only more frightening by the alcohol. The wet, gurgling growls were her stereo. The sweltering, heavy breathing came from the trees whistling outside the window. It was an after school special. Everything was manufactured. A Scooby Doo episode with exquisite special effects-there was no other explanation. Young Watson’s machine stuttered, stammered, coughed through his hackneyed thoughts. Too much to process, too much to handle, system overload, red alert, gates closing, alcohol flooding, vision blank, mind blank, reloading when threat subsides.

If any gears remained functioning, they were promptly tossed out the window. The only thing remaining was the beast in front of him. 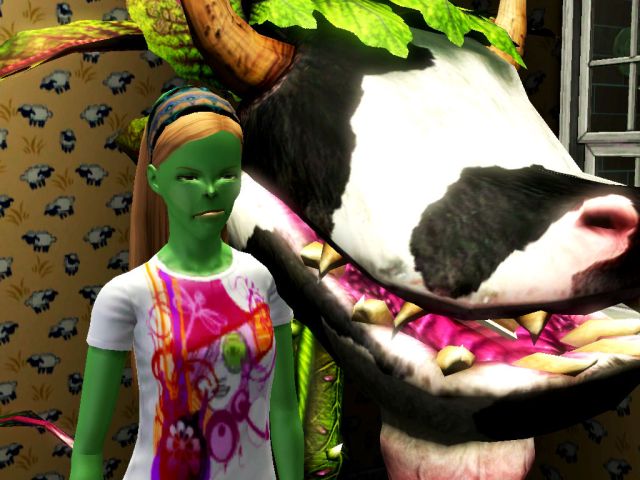 Its teeth gnashed, and its tongue slithered out from between them like a glare through a crowded room. Huge nostrils huffed heavy spurts of sweltering, sickening breaths; the whole room reeked of an ancient decaying flooding from between the horror’s black lips. Its eyeless head swung back and forth ravenously, black and white splotches blurring to a menacing grey as its fever intensified. Its udders nearly scraped the floor. Young Watson’s mouth was a desert; his lips parched to sandpaper.

The silence stretched for the length of a moderately large highway. 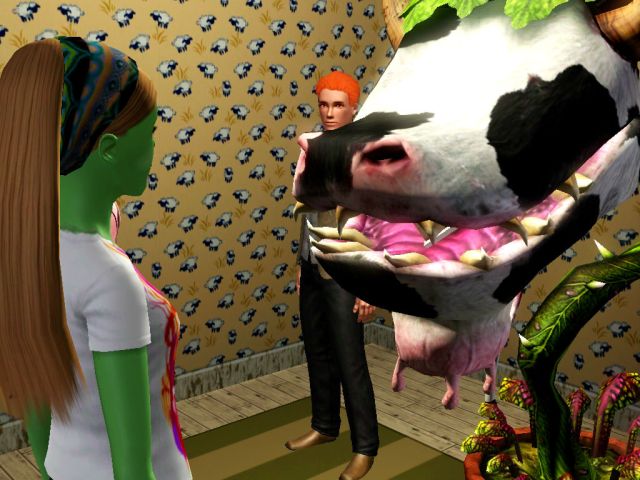 “Get out,” said Young Watson flatly.

“What?” asked Rose. Her voice quavered.

“Get out.” Young Watson’s voice rose. “Get the fuck out.”

“Are you sure that’s not the vodka talking?” inquired Angus.

Young Watson slunk from the room. His head pounded harder than a wrestling match. After a brief peek from the kitchen doorway, Julia approached cautiously. “You okay?” she asked. 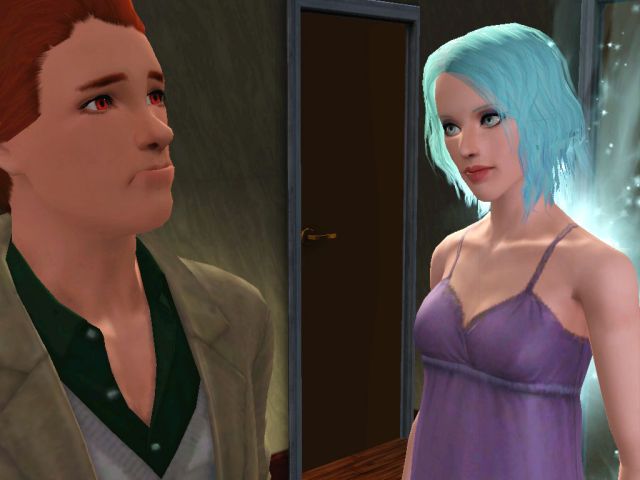 “Drunk,” sighed Young Watson. “It worked for Grandpa, but it didn’t work for me.”

“I’m sorry,” said Julia truthfully. She was rarely purely honest with herself or anyone else, but for a brief moment, a grain of truth slipped past her teeth.

A/N: Man, sorry if this was a fairly dark chapter. I’ve had a horribly stressful week and can’t seem to write anything happy to save my life. It’ll get better soon enough, though. Finals are over on Tuesday, and the One Act goes to competition Friday, and if we don’t win, then that’s over, too! Then more Simming time, huzzah. 😀

Anyways, just a little warning about the next chapter. I’ve expanded the entire Belue house massively, which has left their decorating a bit, er, wanting. It will get better as their capital increases, though! 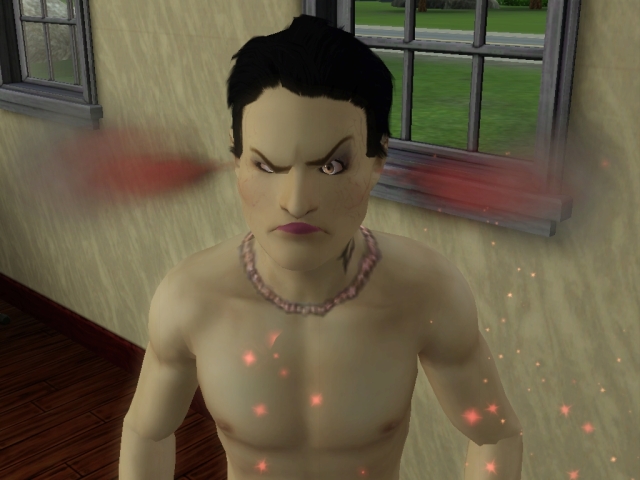 Scarlett’s boyfriend, Dante (I really need to introduce this guy), is getting some abuse from Julia. She really hates those vampires. 🙂

Madison was dreamed up a little east of the middle of nowhere, and was assembled a few blocks away from that. As her shelf life has worn on, she has developed a deep love for writing, style, art, emoticons, cute boys, and videogames-particularly The Sims. She hopes you enjoy her humble blog. Cheers. :D
View all posts by Anonymous Miss →
This entry was posted in Generation 4 and tagged and that's terrible, daisy, julia, moonlight falls, sims 3 legacy, the belue legacy, young watson. Bookmark the permalink.

17 Responses to 4-6: When Life Hands You Lemons, Make Vodka